The Prout School will perform SHOUT! The Mod Musical on June 4 and 5, 2021. This mod musical brings back the smashing sounds that made England swing in the '60s.

With its irresistible blend of hip-swiveling hits, eye-popping fashions and outrageous dance moves, SHOUT! The Mod Musical takes audiences back to the music, style and freedom of the 1960s. Created by Phillip George and David Lowenstein, SHOUT! features terrific new arrangements of such classic tunes as "To Sir with Love," "Downtown," "Son of a Preacher Man" and "Goldfinger."

The review follows five groovy gals as they come of age during those glorious days that made England swing. Traveling in time from 1960 to 1970, SHOUT! chronicles the dawning liberation of women, from the rise of Dusty Springfield, Petula Clark and Cilla Black as independent women with major careers, to their American counterparts, redefining themselves in the face of changing attitudes about gender. With a shimmy and shake, the songs are tied together by hilarious sound bites from the period – from '60s advertisements to letters answered by an advice columnist who thinks that every problem can be solved with a "fetching new hair style and a new shade of lipstick."

The songs in this delightful musical resonate with a timeless quality that appeals to every generation. (Music Theatre International) 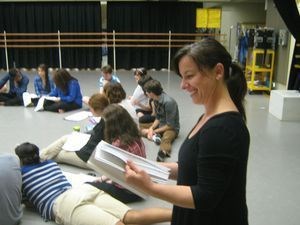 For the 2020/2021 academic year, we welcome long-term substitute Nina Smith.

Mrs. Smith taught theatre arts at the Waterbury Arts Magnet School in Waterbury, CT for 15 years. She is an alumni of Our Lady of Mt. Carmel School, Holy Cross High School, and The University of Scranton. She attended Chapman University San Diego Campus for her continued education.

Her main-stage theatre productions received many accolades, with many students garnering scholarships and professional opportunities in all facets of theatre arts.